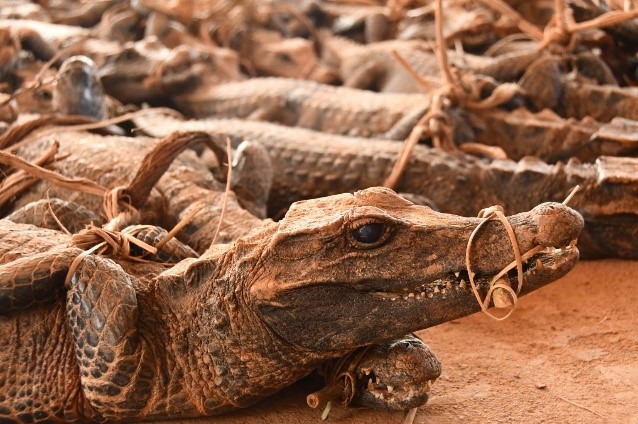 In accordance with its agreement with the Congolese State, the company CIB has developed Surveillance and Anti-Poaching Units (USLAB). This FSC-certified company operates forest concessions located on the edge of the Nouabalé-Ndoki National Park. Within this framework, CIB is a member of the Partnership for the Management of the Park’s Peripheral Ecosystems (PROGEPP). PROGEPP is based on a partnership between the Congolese State, CIB and a nature conservation NGO, the Wildlife Conservation Society (WCS).

Recently, the eco-guards of PROGEPP, the anti-poaching partnership between the Ministry of Forests, WCS and CIB, seized 38 dwarf crocodiles. It is a truly fascinating forest species, timid and mainly nocturnal, spending most of the day hiding in the water or burrows. Although the dwarf crocodile is partially protected in the Republic of Congo, its consumption is appreciated by the local population. Why is it so important to protect it from poaching? Quite simply because this species is a precious ally of fishermen.

Dwarf crocodiles are strongly suspected to play a critical role in the ecosystem function and have a special relationship with wetland fish. Their burrows provide microhabitat and refuge for forest-breeding fish, especially in the dry season. The burros effectively serve as the conduit between surface habitats and the subterranean water storage where these fish wait until the rains and the increasing water levels.

When the crocodile population collapses due to poaching, the fish also desert the area and fishermen are forced to leave, as the area has become uninteresting to them. The dwarf crocodiles are therefore the fishermen’s allies. Congratulations again to our eco-guards for their daily work!