Aller au contenu principal
ATIBT / News / Focus on the private sector of the forest and timber sector in Cameroon: State of play of actors 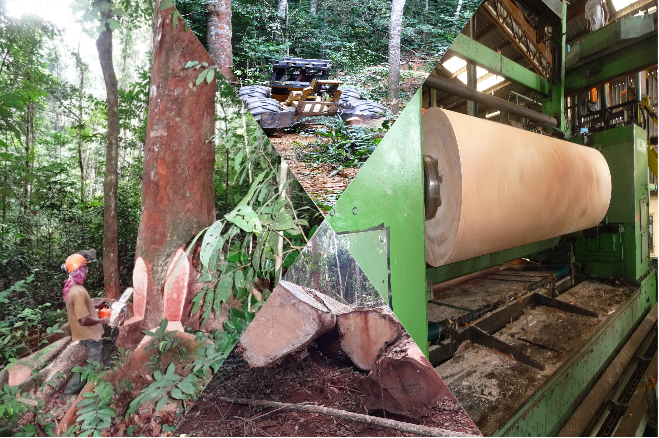 As part of the activities of the FLEGT REDD CERTIF Projects implemented in partnership with ATIBT and funded by the EU, FFEM and KFW through the PPECF, the GFBC has initiated a study on the configuration of the private forest sector in Cameroon. The study was entrusted to a team of national consultants from the “Sustainable Development Engineering” (I2D) study firm.

The study which draws up the inventory of actors in the private sector of the timber forest sector in Cameroon was carried out between August and December 2019. Its objectives were, on the one hand, to improve knowledge of the Cameroonian private sector by term of typology of actors, professional associations, their privileged communication channels, the strengths and weaknesses of their operating system, etc. and on the other hand, to set up a database of actors in the forest and wood sector according to criteria related to the activity, the place in the production chain, and the level of involvement in the FLEGT VPA and Certification processes.

It is clear from the study conducted by Cabinet I2D that the private sector of the forest and timber sector in Cameroon is made up of around one hundred (113) large and medium-sized actors, as well as a multitude of others actors of small and very small size. There are approximately 21 large companies, 92 medium-sized companies and thousands of small companies.

These actors all work along the wood production chain segmented into 4 levels, notably (1) upstream forest production, (2) wood processing at meso level, (3) marketing of downstream wood products and (4) the transport of wood products at the transverse level.

The majority of actors upstream of the chain operate on forest areas representing nearly 88% (6.22 million over 7 million ha) of the country’s production forests, with an average of 100,000 ha of forest per actor.

Mid-chain actors, with around 191 operational units have a processing capacity of around 2.8 million m³, or 85% of national log production.

In addition to this production capacity, the actors of the private sector conduct their activities while maintaining an associative landscape based on affinities and other common interests. The associative landscape of actors in the private forest sector appears to be very fragmented because it is made up of around thirty associations and unions sharing the vast majority of large actors, and around fifty (50) for small and very small actors. It is made up of 23 associations and unions of craft operators, 14 associations and unions of large, medium and small businesses and around 50 union associations of very small businesses. This very fragmented form of structural organization is said to be at the origin of a relatively weak collective action, and the engine of the communication and functional difficulties noted by the actors of the sector.

It thus appears that, in summary, the actors of the private sector of the forest-wood sector in Cameroon have, to varying degrees, approximate knowledge of the different mechanisms (FLEGT VPA, REDD, Certification, …) as well as tools likely to promote the legality of timber. Nevertheless, it would be necessary to envisage a capacity building program articulated for some, around transparency to establish better visibility of their activities, and for others, around awareness raising as well as training in all aspects and complexities of the mechanisms created to enable them to get better involved.

A database provided with the necessary information and contacts has been developed and will be used to target the beneficiaries of the actions to be planned within the framework of current or future projects on FLEGT, REDD and Private Certification. The training needs targeted by the study will be taken into account in guiding the project’s support actions for needy actors.

The content of this document is the sole responsibility of the authors and can in no way be considered as reflecting the opinion of the EU, FFEM or KFW.