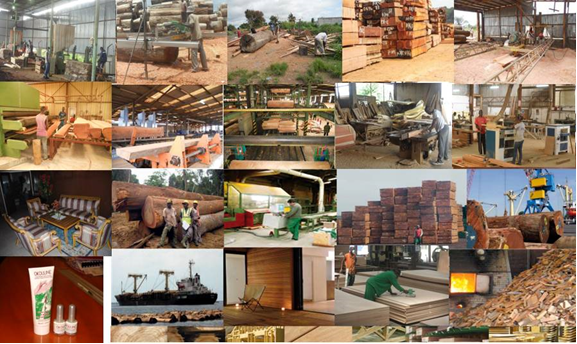 The general objective of the study was to improve knowledge of the Gabonese private sector of the forest-wood sector.More specifically, it was a question of (1) assessing the situation of forestry and industrial companies, professional associations and their markets in order to better target the actions of the FLEGT-IP and PPECF projects; (2) identifying the professional associations for the different categories of actors in the private sector of the forest-wood sector, and their representativeness in the Gabonese private forestry sector in the framework of the implementation of certification and the APV-FLEGT process; (3) knowing the privileged communication channels according to the type of operators.

The study was carried out by ROSCEVAC experts in three provinces of Gabon, namely the Estuary, Ogooué-Lolo and Ogooué-Maritime. The three provinces constitute an important production, employment and infrastructure basin. Thus, we can note the presence of the GSEZ, the HUB of Lastourville, Precious Woods, SBL, EGG, SEEF.

The results of the study show that there is a diversified typology of actors in the sector. Depending on the type of activity, we find forest operators/planners; industrial wood processors; traders; importers and exporters; transporters; logisticians and forwarding agents. Other stakeholders also influence the forest-wood sector because they are involved in the development of the sector in different ways. These include professional associations or trade unions; donors; public administrations; consulting firms; civil society and training and research institutions.

Regarding professional associations, four (4) were identified and met (UFIGA, UFIAG, SIAG and FGBSP). Of all of them, only UFIGA operates regularly because it is better structured, organized, equipped with means, resources and operational capacities.

The means of communication of forestry and industrial companies depend on their location in relation to transport infrastructures in the field. The evacuation of forest products is done either by road, train or rivers.

Among the future actions of the FLEGT-IP and FLEGT-Certification projects, those relating to communication, consultation and the establishment of a digital platform are considered a priority, as well as the effective promotion measures for SME/SMI/VSEs relating to clustering and mass effect. The digital platform will be a kind of portal or website that will serve as a means of sharing information, tools, procedures, legislative and regulatory texts.

The study also reveals the need for training modules dealing with sustainable forest management and wood processing, the core business of these companies. These are considered low priority by the timber industry, paradoxically in comparison to those relating to the FLEGT VPA, forest certification and the fight against climate change. The companies have little knowledge of FLEGT VPA processes and certification.

Almost all stakeholders are not involved in these processes. With regard to the FLEGT VPA process, negotiations between Gabon and the EU, which began in 2009, have so far stalled. In December 2019, the new Minister in charge of Forests, Mr Lee WHITE, expressed interest in resuming the VPA-FLEGT negotiations in a letter to the EU.

As for the presidential decision of 26 September 2018 on the certification of all forest concessions by 2022, it is at this stage inoperative due to the unpreparedness of stakeholders and the financial costs immediately incurred. However, thanks to the PPECF 2 coaching programme, a dynamic can be observed with the registration of several companies that are candidates for forest certification.