Medals of honour for two iconic ATIBT figures and members of ATIBT’s board of directors, Robert Hunink and Bernard Cassagne

On 6 September 2016, Mr. Robert Hunink, President of ATIBT, received Congo’s Cross of the Commander of the Order of Merit, in the presence of Congo’s Minister of State and former Minister of Water and Forests, His Excellency Henri Djombo and Congo’s representative on the ATIBT Board, Mr. Grégoire Nkeoua) to celebrate a 40-year professional career dedicated to timber – and to Africa. While at CIB, Robert Hunink was able to implement social welfare projects for the benefit of the local populations, as well as a genuine sustainable forest management culture, notably by establishing the Congo basin’s first biomass power plant and helping the company become a pioneer in terms of FSC certification.

Robert Hunink launched his career in Fetim-Bekol’s plywood division in Amsterdam. He was then transferred to the hardwood division in Bekol in San Pedro, Ivory Coast. He then held successive positions as manager at TPL in Liberia, then at Lionex in Singapore, and then returned to the Netherlands, where he was appointed CEO of Bekol. In 1995 he left The Netherlands to become the head of tt Timber International Group, in Basel, Switzerland. Tt Timber International was then acquired in 2006 by DLH, a Danish group, of which he became a member of the Executive Board. In 2010, he was appointed President and Worldwide Head of the timber products division at Olam; he proposed that Olam purchase the CIB from the DLH group. He was Chairman of the Board at the CIB during ten years. 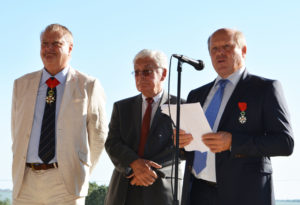 As for Mr. Bernard Cassagne, he received on 2 September 2016 the Cross of the Knight of the Legion of Honour, after a proposal made by the Minister of Agriculture, Agri-Food and Forestry to the President of the Republic for his career and commitment – spanning nearly 40 years – dedicated to the development and the preservation of tropical forests in Africa, especially the Congo Basin and the Brazilian Amazon.

A graduate of the French National School of Forestry, Bernard Cassagne began his career in Central Africa, working for the CTFT, now CIRAD. After this, he earned the title Accredited Forestry Expert from the Ministry of Agriculture, and Expert to the Nimes Court of Appeal. Later on, he obtained a PhD in natural sciences thanks to his thesis on wood energy issues in Africa at the Tropical Botany Laboratory of Montpellier’s University of Science and Technology. ATIBT has benefitted from his expertise, as he served as President of the Forest Commission for over a decade. He now heads the Forest Resources Management group, which he founded in 1987. In Africa, the company is familiar to governments, donors and a large number of private operators (and ATIBT members) thanks to its subsidiary: FRM Engineering, a leading provider of services for the sustainable management and use of tropical forests, and for the development of the tropical timber industry.